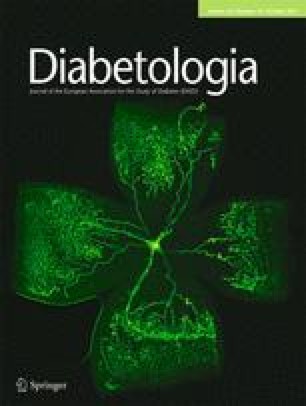 EnRAGEd about death in type 1 diabetes

The mortality rate for those with type 1 diabetes has declined quite remarkably over the last decades. Recent data from Allegheny County (PA, USA) suggest a 33% fall in the 30-year mortality rates for those diagnosed with type 1 diabetes as children in the late 1970s, compared with those diagnosed in the early 1960s [1]. Declines have also been reported from Europe [2, 3]. Much of this improvement probably reflects better diabetes management, spurred on by the demonstration of the long-term value of intensive glycaemic management [4, 5] and the advent of self-monitoring of blood glucose and HbA1c testing. Nonetheless, mortality still remains five to six times higher for those with type 1 diabetes [1] compared with an age-matched community population, and much work remains to be done.

One of the major factors underlying the excess mortality is the development of renal disease [6]. The cumulative incidence of end-stage renal disease has shown a parallel fall to that of total mortality, reflecting its large contribution to overall mortality [7]. This link between renal mortality and total mortality has recently been further highlighted by the Finnish Diabetic Nephropathy (FinnDiane) study group, which has reported that all the excess mortality over a 7-year period of follow-up of type 1 diabetes in Finland is seen in those who develop microalbuminuria and more severe proteinuria [8]. The Pittsburgh Epidemiology of Diabetes Complications (EDC) study was recently able to confirm these findings and extend them over a 20-year follow-up [9]. In this study, many of the few deaths in those without microalbuminuria were due to causes other than diabetes [9]. It should be noted, however, that microalbuminuria may represent more than just early stage diabetic nephropathy as it is a strong predictor of cardiovascular disease in the general population [10].

Thus, not only does renal disease itself contribute directly to the premature mortality in type 1 diabetes, it also relates to the development of coronary artery disease in T1D, as was recognised over 20 years ago in reports from the Steno and Joslin clinics [11, 12]. However, with the prevention or delay of renal disease we do not seem to be experiencing as great a fall in cardiovascular disease events as might be expected [7]; rather, it appears that coronary artery disease (CAD) continues to develop but now does so more often without preceding albuminuria. For example, in the Pittsburgh EDC study, over 80% of those developing CAD in the first 10 years of follow-up had microalbuminuria or more severe proteinuria [13], while in the second decade of follow-up this had fallen to 24%.

What might explain this pattern? It seems likely that the relationship of CAD/atherosclerosis with glycaemia is more complex than that of other complications, such as retinopathy [13]. Furthermore, it has been postulated that insulin resistance may play a major role in CAD in type 1 diabetes [13]. Another likely contributor is the inadequate treatment of standard risk factors, such as blood pressure and lipids [14], which are also present in type 1 diabetes. In addition, the roles of enhanced AGE formation and the receptor for AGE (RAGE) have yet to be fully explored. AGEs, whether measured in tissue [15, 16] or in serum [17], have been known for some time to predict complications. However, this field has been advanced recently with the advent of soluble RAGE (sRAGE) assays. sRAGE is formed by proteolytic cleavage of the membrane-bound RAGE receptor. It lacks the transmembrane and cytoplasmic domain of the regular (full-length) receptor but is measurable in blood [18]. sRAGE is also thought to be protective as it can act as decoy for RAGE ligands [19, 20]. However, it is not always clear what an increase (or decrease) in sRAGE level means in terms of risk, as illustrated by an important paper by Thomas et al. in this issue of Diabetologia (again, from the FinnDiane study) in which a strong direct relationship is shown between sRAGE and both total and cardiovascular mortality [21]. The findings of Thomas et al. are thus in contrast to those from the general population where an inverse association has been reported with coronary artery disease and atherosclerosis in general [19, 20]. While there are many potential explanations for these differences, including the differing outcomes (mortality vs morbidity) and confounders that were considered, whether an increased concentration of sRAGE is good or bad may also depend on the setting in which it is measured. In type 2 diabetes an inverse association between levels of sRAGE and RAGE in monocytes has recently been reported, suggesting that in type 2 diabetes RAGE production increases and the sRAGE level decreases [18]. However, the sRAGE level may be so markedly increased in type 1 diabetes that it predominantly reflects the upregulation of the RAGE pathway. For example, in type 1 diabetes the high sRAGE concentration may reflect a general enhancement of RAGE formation, with proportionate cleavage from the membrane to yield a high sRAGE level. In this situation the high sRAGE level may represent increased risk. However, in conditions with a lower overall sRAGE concentration, a higher sRAGE may more closely identify those with a disproportionately high cleavage, i.e. a group with greater protection against RAGE-mediated damage. The current FinnDiane findings [21] are also supported by the results of a report from Spain, where a series of chronic heart failure patients were studied and a direct relationship was seen between sRAGE and both the extent of CAD and the severity of heart failure [22].

Thomas et al. [21] also suggest that the sRAGE prediction is independent of renal disease, providing some contrast to their prior report of no excess mortality without renal disease [8]. However, as subsequent development of renal disease was not accounted for, renal disease may still be part of the pathway and is known to be a powerful determinant of both AGE and RAGE, most likely resulting from decreased AGE clearance [23, 24]. Nonetheless, what does appear to be clear from this latest FinnDiane contribution is that sRAGE is unlikely to be directly causal: the investigators conducted a ‘Mendelian randomisation’ analysis demonstrating that genetic polymorphisms associated with sRAGE concentrations are not themselves predictive of either total or cardiovascular disease mortality.

These results should provide an impetus to develop further research to better understand how AGEs lead to tissue damage and diabetes complications, with the hope that this central pathway can be appropriately retargeted. This is an exciting time for the field in general, for the assessment of tissue AGEs is becoming more readily feasible by, for example, the measurement of skin AGEs by fluorescence spectrometry. The resulting skin intrinsic fluorescence appears to show stronger associations with neuropathy [25] and coronary artery calcification [26] than do 20-year average HbA1c values. Furthermore, a recent report from the Medalists study of 50-year type 1 diabetes survivors, who are characterised by a remarkable resistance to complications, raises the possibility that there may be some AGE specificity in terms of complication risk and protection [27]. In addition, another recent report, from the EURODIAB prospective study, also of type 1 diabetes, suggests that two plasma AGEs [N ε-(carboxyethyl)lysine and pentosidine] predict cardiovascular disease (both fatal and nonfatal) and all-cause mortality [28].

Finally, it is encouraging to note that these exciting observations are not without therapeutic implications, as a number of pharmacological agents appear to have ‘AGE-modifying’ effects [15]. Angiotensin-receptor blockers, in particular, have been thought to have such properties (recently reviewed in [29]), and thus may represent the beginning of a new wave of RAGE-orientated therapies.

The author declares that there is no duality of interest associated with this manuscript.