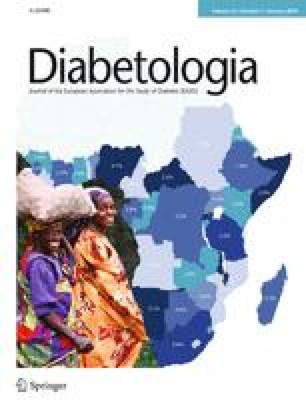 Trends in cardiovascular admissions and procedures for people with and without diabetes in England, 1996–2005

The aim of this study was to compare 10-year trends in admissions, with and without diabetes recorded, for myocardial infarction, angina, stroke, percutaneous coronary interventions (PCI) and coronary artery bypass graft (CABG).

We used national hospital-activity data in England collected between 1996 and 2005 and compared trends in admissions, after adjusting for age, sex and area-level deprivation.

The incidence and prevalence of both type 1 and type 2 diabetes are increasing worldwide [1]. Macrovascular complications of diabetes, which include stroke, transient ischaemic attacks, myocardial infarction and angina, are responsible for considerable morbidity and mortality for people with diabetes. The risk of cardiovascular events in people with diabetes is two to four times the risk in people without diabetes [2]. The management of these complications places a substantial and growing burden on healthcare systems [3].

Trends showing a reduction in cardiovascular mortality have also been reported in the UK [11], and this has generally been attributed to a reduction of cardiovascular risk factors [12, 13]. However, little is known about recent UK trends in hospitalisations of people with and without diabetes. Hospital admissions account for the majority of the economic cost of cardiovascular disease—estimated at 76% of the total cost [11]. An evaluation of temporal variation may be useful for future healthcare planning and resource allocation. We investigated trends in major cardiovascular events requiring hospital admission and procedures between 1996 and 2005 using routine admissions data from all National Health Service (NHS; public) hospitals in England, comparing admissions with type 1 or type 2 diabetes recorded and admissions without diabetes recorded.

The study was carried out with Section 60 approval from the Patient Information Advisory Group (PIAG) (to hold confidential data and analyse them for research purposes) and approval from St Mary’s Local Research Ethics Committee. We examined hospital episode statistics (HES) submitted between the financial years 1996–1997 and 2005–2006 for all NHS hospital trusts in England. The dataset also included private patients treated in NHS hospitals but not in private hospitals. The basic unit of the database was the ‘consultant episode’, which covered the period during which a patient was under the care of a given consultant (an admission can comprise more than one episode). By matching patient details and admission dates, these were linked into admissions. If the patient was transferred to another hospital, this was not counted as a separate admission.

The International Classification of Diseases, tenth revision (ICD-10) (http://www.who.int/classifications/icd/en/), and the Office of Population, Censuses and Surveys Classification of Surgical Operations and Procedures, fourth revision (OPCS-4) codes were used to define diagnoses and operations, respectively. HES now contains 14 diagnosis fields, of which the first is the primary, and 12 procedure fields, the first of which corresponds to the most major procedure during the episode. HES has incorporated ICD-10 diagnostic coding since 1995/1996.

Admissions were divided into three groups for analysis: no diabetes, type 1 diabetes (ICD-10 E10, ‘IDDM’) and type 2 diabetes (ICD-10 E11, ‘NIDDM’). Complications of diabetes, considered as the primary diagnosis to be studied with diabetes as the second or subsequent diagnosis, were myocardial infarction (ICD-10 I21–I22), angina (ICD-10 I20) and stroke (ICD-10 I60–I64). Cardiovascular interventions studied were percutaneous coronary intervention (PCI; OCPS-4 K49–K50) and coronary artery bypass graft (CABG; OCPS-4 K40–K46). For inclusion in the dataset, these OCPS-4 codes could be recorded in any procedure field in any episode during the admission.

Socioeconomic deprivation quintiles were assigned using the Carstairs index of deprivation [14]. Patients’ postcodes were mapped to an output area (with an average of 1,500 people), which was then given a deprivation score and assigned to quintiles of equal population nationally.

Admission data for the same patient were determined using a combination of date of birth, sex and postcode as these were the only identifiers available for all years of data. We calculated the number of admissions per admitted patient for each year and the number of different patients admitted each year. To calculate death rates, each patient’s final admission in the year was used as the denominator and in-hospital deaths were identified using the method of discharge field for the numerator.

Data analysis was performed using the Statistical Package for the Social Sciences (SPSS) v14 and the R statistical package (http://www.r-project.org/). Poisson regression was used to model the number of admissions per year, adjusting for age, sex, deprivation quintile and diagnosis group. Logistic regression was used for determining trends in mortality rates.

Of all admissions for myocardial infarction in 1996/1997, 7.2% had type 2 diabetes recorded, rising to 13.9% in 2005/2006. Similarly, the proportion with type 2 diabetes admitted for angina increased from 6.7% in 1996/1997 to 15.3% in 2005/2006, and for stroke the proportion increased from 6.2% to 11.3% over the same period. By contrast, the proportion of all patients admitted with type 1 diabetes recorded showed a general downward trend except for a slight increase at the start of the period. Figure 1 shows the number of admissions for myocardial infarction, angina, stroke, percutaneous coronary interventions and coronary artery bypass grafting in the years 1995/1996–2005/2006 by recorded diabetes status. Admissions per year are shown relative to 1996 totals and on a log scale so that upward and downward trends are given equal importance (relative risks are not symmetrical about 1).

Change in numbers of admissions/procedures per year, adjusted for age, sex and quintile of deprivation relative to 1996/1997 numbers

The change in 10 years is derived by raising the change per year to the tenth power and assumes a linear trend; this assumption is not well met for type 1 diabetes

Deaths and odds ratios by diabetes status for admitted patients (rather than total admissions) in 1996/1997 and 2005/2006, adjusted for age, sex and quintile of deprivation

Death-rate denominators are numbers of patients admitted in the year, not total admissions

We found a reduction in the number of hospital admissions from around 1999 to 2000 for people with type 1 diabetes. This decline may have been due to the introduction of a new diagnostic classification of diabetes in 1999 when the terms type 1 and type 2 diabetes were re-introduced [15]. It may also reflect a smaller increase in the prevalence of type 1 diabetes compared with type 2 diabetes.

The mortality rate and rates of stroke and further infarcts following a myocardial infarction fell in many countries between 1999 and 2006 [8]. We also found that the mortality rates following MI and stroke decreased over the 10 years of this study. Data from the Health Survey for England (http://www.ic.nhs.uk/statistics-and-data-collections/health-and-lifestyles/health-survey-for-england/health-survey-for-england-2004-updating-of-trend-tables-to-include-2004-data) show an increase in overall diabetes prevalence from 2.9% in 1998 to 4.3% in 2003 for men and rises from 1.9% to 3.4% in women over the same period. If we assume a linear trend, then the estimated rise between 1995/1996 and 2005/2006 is from 2.3% to 4.9% in men (a rate ratio of 2.1) and from 1.6% to 4.0% in women (a rate ratio of 2.5). By comparison, the numbers of admissions for the three diagnoses examined in our study increased by between 2.0 and 2.2 times; revascularisations increased by 2.6 times for CABG and 8.6 times for PCI.

Increasing PCI numbers, seen in all groups, reflect the wider availability of this procedure and the trend for earlier intervention in patients with coronary heart disease. Earlier diagnosis of coronary heart disease coupled with more advanced medical management and greater use of PCI helps to explain the fall of CABG surgery in the non-diabetic population. The very large increase in PCI numbers with type 2 diabetes recorded probably reflects the more advanced atherosclerotic coronary disease profile of these patients. People with diabetes undergoing PCIs are known to have significantly more disease progression and are more likely to experience the need for repeated revascularisation [16]. While PCI use has increased in people without diabetes, the number of CABG operations performed has risen greatly in people with type 2 diabetes. The disparity between the numbers of people undergoing CABG with and without diabetes may be because people with diabetes are more likely to have left-main-stem or triple-vessel coronary disease, both of which are indications for CABG surgery [17, 18].

Although the use of preventative measures in people at risk of cardiovascular disease has increased substantially over recent years, these measures are not always used in people at high risk [19]. The importance of diabetes as a major cardiovascular-disease risk factor has, however, become more widely known and this may have led to an increased recording of diabetes in hospital episodes. This, in turn, would have contributed to the increase in the proportion of cardiovascular events in patients coded as having diabetes. In this study we have assumed that the changes in admissions by diabetes status are not simply a reflection of temporal changes in diagnostic coding. Although criticisms have been levelled at HES data in the past because of the perceived inaccuracy of coding [20, 21], a systematic review of discharge coding rated its accuracy as high, particularly for operations and procedures [22]. With the more common diagnoses and procedures, coding inaccuracies are likely to be minimised [23]. It is also possible that some patients have been misclassified as having type 1 rather than type 2 diabetes prior to introduction of the new classification of diabetes. Such ‘diagnostic transfer’, which can be due to clinical or administrative reasons, is unlikely to have had a significant impact on the results of this study.

With the advent of troponin testing, the diagnosis of myocardial infarction changed during the study period. While this may have caused an increase in diagnosed events, particularly in people with diabetes because of the higher risk of ‘silent’ myocardial infarctions, it is unlikely to fully explain the differences seen. Limitations also surround the diagnosis of ‘angina’. Unfortunately, data on ethnic differences are missing because ethnicity is poorly coded (missing in approximately 30–40% of HES data).

A. Bottle is employed within the Dr Foster Unit at Imperial College London. The Unit is funded by a grant from Dr Foster Intelligence, an independent health service research organisation. The Department of Primary Care and Social Medicine receives support from the National Institute for Health Research Biomedical Research Centre funding scheme and the National Institute of Health Research Collaboration for Leadership in Applied Health Research & Care programme. The authors declare that there is no duality of interest associated with this manuscript.