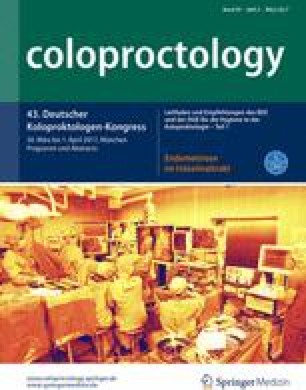 Endoscopic Submucosa Dissection Fistula Tract Rectovaginal Fistula Contrast Enema Soft Tissue Defect
These keywords were added by machine and not by the authors. This process is experimental and the keywords may be updated as the learning algorithm improves.

The video was first presented at the ESCP meeting in Belgrade 2013.

The online version of this article (doi:  10.1007/s00053-017-0151-6) includes a video about gracilis muscle transposition to repair a rectovaginal fistula. The article and video are available from the electronic archive of SpringerMedizin.de at http://www.springermedizin.de/coloproctology. You can find the video at the end of the article as “Supplementary Material”.

Gracilis muscle transposition is an option for simultaneous fistula closure and repair of soft tissue defect in rectovaginal fistulas.

Recurrent rectovaginal fistulas and local defects surrounded with scar tissue have a high failure rate after conventional fistula operations. The graciloplasty has the potential of covering the fistula and refill soft tissue defects. Due to the optimal perfusion of the muscle fistula, healing may be supported.

A 69-year-old woman with a multirecurrent rectovaginal fistula underwent surgery. The fistula had existed since an endoscopic submucosa dissection (ESD) for a high-grade rectal adenoma had been performed. An attempt to close the fistula with a flap procedure was undertaken three times. A temporary stoma had already been formed. Thus, excision of the fistula, closure of the fistula tract, and covering the fistula with gracilis muscle was performed.

Patients are advised to reduce physical activity for 2 weeks postoperatively. Clinical tests including rectoscopy and contrast enema were scheduled after 6 weeks. When the fistula was closed, stoma resection was planned.

Side effects and fistula persistence

Due to the minimally invasive technique, wound infections are rare. In case of fistula persistence, conventional techniques (e.g., flap procedures) can be used to close the remaining fistula tract.

Transposition of the gracilis muscle seems to be an effective procedure especially for recurrent rectovaginal fistula when conventional surgery fails.

A. Fürst declares that he has no competing interests.