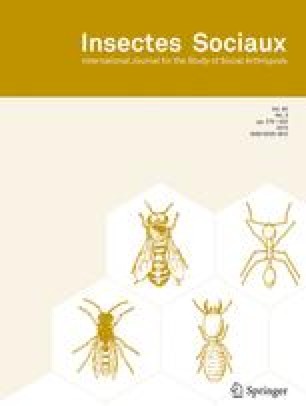 The reproductive cycle of thelytokous colonies of Cerapachys biroi was investigated in laboratory conditions. It included several stages, the duration of which was assessed by direct observation on experimental nests set up by fission of natural, queenless, colonies. The results show that two phases of adult activity alternated while cohorts of brood developed synchronously. During the statary phase, virgin workers laid diploid eggs simultaneously but no foraging activity was observed until the following phase which began after the callow workers of the previous brood cohort emerged and the eggs hatched. During this foraging phase, workers explored intensively for food while larvae matured synchronously. Biometrical measures allowed to determine that three larval instars occurred in this species. While larvae started pupation, workers stopped to forage and the next statary phase took place, during which a new cohort of eggs was laid and pupae matured. This repeated phasic reproductive cycle where adult activity and development of the brood are synchronised reminds that of true army ants (subfamily Ecitoninae), which brings new arguments in favour of a filiation between both groups.