The Japanese Journal of Thoracic and Cardiovascular Surgery 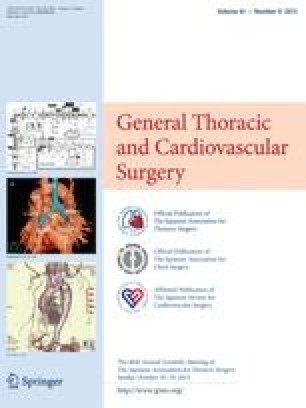 The Japanese Journal of Thoracic and Cardiovascular Surgery

We assessed the appropriate length of an elephant trunk prosthesis based on our experience with 9 patients experiencing extensive thoracic aneurysms. There were 3 patients with a true aneurysm, 5 patients with a dissecting aortic aneurysm, and 1 patient with a true plus dissecting aortic aneurysm. The subjects were 4 men and 5 women and, at the time of operation, were from 38 to 74 years old. The second-stage operations were performed on 6 patients from 9 days to 6 months after the first-stage operation. In the first-stage operation, one patient died of pneumonia during the hospital stay and another died of multi-organ infarction after 15 months. In the second-stage operation, two patients died of brain hemorrhage in the chronic stage after the operation. The length of the elephant trunk prosthesis was 3 cm in the three early patients, and in one of them the elephant trunk could not be utilized due to its insufficient length. In the next three patients, the length was extended to 5 cm, but one of patient experienced an expansion of the aneurysm in the descending aorta due to a graft of insufficient length which could not decompress the aneurysmal wall. Therefore, in the last three patients, the length was further extended to 10 cm, and the second-stage operation was performed uneventfully on the 64th, 9th and 45th day, respectively after the first-stage operation within a continuous hospital stay. Neither expansion of the aneurysm nor thromboembolism was found during the waiting period for any of the second-stage operations. Accordingly, we recommend using a 10 cm elephant trunk prosthesis.

© The Japanese Society of Thoracic and Cadiovascular Surgery 1999