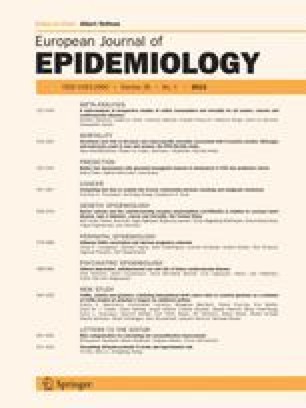 Survival differences in Austrian patients with the acquired immunodeficiency syndrome

We investigated the association of clinical and demographic factors on survival of the 901 AIDS cases diagnosed until 31 December 1992 and reported to the Austrian Health Authorities up to 20 January 1994. The overall estimated median survival of patients with AIDS increased substantially from 8 months in 1987 to 16 months in 1988, although this increase was not significant by the log-rank test. However, the differences in hazard rates were larger at the beginning of the survival curve: between 1987 and 1988 the proportion surviving at 1 year increased from 41 to 62%, compared to an increase of the proportion surviving at 2 years from 30 to 35% (Breslow test,p value 0.008). AIDS patients diagnosed between 1988 and 1992 (n=755) were analyzed in more detail. Multivariate survival analysis revealed a shorter survival for those with residence in Eastern Austria, recipients of blood products, individuals with unknown transmission risk, those presenting with two AIDS indicator diseases and those with higher age at AIDS diagnosis. Candidal esophagitis as AIDS indicator disease was associated with longer survival. One hundred eighty-eight of the 755 AIDS patients (24.9%) died within the first 3 months after diagnosis of AIDS. We conclude that the survival time for AIDS patients has improved considerably after 1987, but survival is still very poor. Several factors have been shown to predict survival of patients with AIDS in Austria. Death within the first 3 months after the diagnosis of AIDS occurred at a relatively high frequency in Austrian AIDS patients. This may be caused by difficulties in the use of health care facilities or by the lack of awareness of HIV infection before diagnosis of AIDS either by patient or care provider.