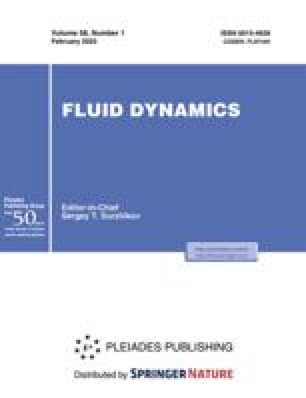 In earlier papers [1, 2], the author and Nigmatulin developed a theory of the unsteady propagation of combustion in aerosuspensions of a unitary fuel (a fuel containing an oxidant) at low subsonic velocities of the gas. The assumption of low velocities permits a number of simplifications which reduce the equations describing the mechanics of multiphase reacting media [3, 5] to the equations of unsteady homobaric (with uniform pressure [1, 3, 4, 6]) motion of gas with distributed blowing and heat release. At a constant mass rate of combustion of the particles, these equations have a class of analytic solutions describing the initial stage of convective combustion of aerosuspensions in open and closed regions with allowance for the possible formation of weak shock waves. In the present paper, these solutions are generalized to the case of a more realistic law of combustion of a particle of a unitary fuel [7]. The results are given of a numerical solution to the problems, and these results make it possible, in particular, to analyze the conditions of applicability of the model with a constant mass rate of combustion of the particles.

Combustion Shock Wave Heat Release Early Paper Constant Mass
These keywords were added by machine and not by the authors. This process is experimental and the keywords may be updated as the learning algorithm improves.