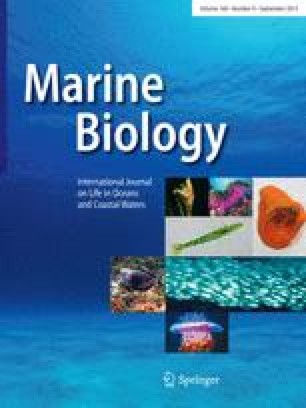 Vertical distribution, and seasonal and diurnal migration of Calanus helgolandicus in the Celtic Sea

The vertical distribution and migration (seasonal, diel and ontogenetic) of Calanus helgolandicus are described from the shallow (100 m) shelf-seas to the south-west of the British Isles. In 1978 and 1979, the overwintering population of C. helgolandicus consisted primarily of Stage V copepodites and adults. By late winter/early spring the copepodites had moulted to adult females (>90%), which matured and bred the first cohorts of the year, prior to onset of the spring phytoplankton bloom in April/May. C. helgolandicus reached a peak of numerical abundance in August of 20x103 copepodites m-2 (over the depth range sampled -0 to 70 m), which was 200 times the population in winter. The seasonal peak of abundance occurred 4 mo after the peak of the bloom of phytoplankton in spring. The yearly development of the copepod was not always out of phase with the diatom bloom, as seen when the data from 1978 was placed in the context of a longer time-series collected at 10 m over 22 yr (1960–1981, inclusive). Large vertical migrations were observed in the younger copepodites (CI and II) in May from below to above the thermocline. In the remainder of the year, the CI and CII stages behaved differently and were located above the thermocline within the euphotic zone. The largest vertical displacements of biomass were seen in the summer months due to the migrations of the CV stages and adults, which had developed from the spring cohorts. It was contended that the seasonal and vertical migrations of C. helgolandicus are part of a more complex pattern of inherent behavior than has been reported previously and that, however difficult this is to discern in the natural populations, it always expresses itself.

Phytoplankton Vertical Migration Phytoplankton Bloom British Isle Euphotic Zone
These keywords were added by machine and not by the authors. This process is experimental and the keywords may be updated as the learning algorithm improves.